Life in the War Zone

Occupy Until I Come

Occupy Until I Come: A.T. Pierson and the Evangelization of the World 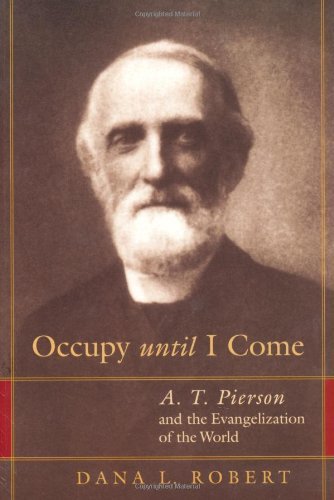 In this well written and engaging biography Dr. Dana L. Robert masterfully depicts the life of a key figure in both 19th Century American Christianity and in the movement of mission mobilization that was sweeping across the western world. Pierson’s ministry navigated the dramatic currents of cultural change that shaped America from the Civil War through the industrialization that dawned with the first decade of the twentieth century. The convictions that guided A.T. Pierson and the spiritual depth of his relationship with God carried him through tumultuous waters and are worthy of our emulation today. In Pierson we discover the too-often-odd matrix of Biblical proclamation, social concern, evangelistic drive, mission mobilization, and a vision for Christian unity. Soon after his death these passions would splinter into the separate movements of fundamentalist, evangelical, and liberal Christianity, but in Pierson they were held simply, purely and without conflict in the heart of one sincere and mightily used servant of God.

I encourage pastors to carefully read this important work, for it holds forth a model of the kind of God-honoring faithfulness needed in our day as we too navigate cultural forces and spiritual winds that are no less threatening to the advance of God’s Kingdom.

Who are we as the people of God? What makes us unique?

In the first of a two-part message I begins to set forth our Jesus-Defined life.