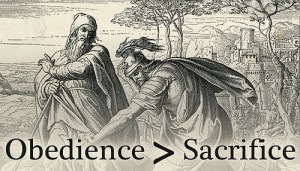 “And Samuel said, “Has the LORD as great delight in burnt offerings and sacrifices, as in obeying the voice of the LORD? Behold, to obey is better than sacrifice, and to listen than the fat of rams.” (1 Samuel 15:22)

Samuel told Saul to defeat the Amalekites, destroying all life (v.3). Saul led his troops in an overwhelming victory, but he spared their king and “the best of the sheep and of the oxen and of the fattened calves and the lambs, and all that was good …” (v.9a). God informed Samuel that Saul had not obeyed and that He had thus rejected him from being king over Israel (v.10). When confronted by Samuel, Saul said, “the people spared the best of the sheep and oxen to sacrifice to the Lord your God.” (v.15).

God wants our explicit and exact obedience to His Word, not our self-manufactured notions of sacrifice. Oswald Chambers astutely observed that “The counterfeit of obedience is a state of mind in which you work up occasions to sacrifice yourself.”

We end up deluded by our own rationalizations, offering to God sacrifices of “worship” and “service” that He neither asked for nor desires, while withholding the obedience that is distasteful to us. It is possible to live one’s Christian life amid delusions and rationalizations dressed up like sacrifice and worship, which are in fact an avoidance of the very thing Jesus commands of us. We often embrace a sacrifice whose price we are glad to pay to cover for obedience whose price we are unwilling to pay.

Questions for reflection and prayer: