“Fathers, do not exasperate your children, so that they will not lose heart.” (Colossians 3:21) 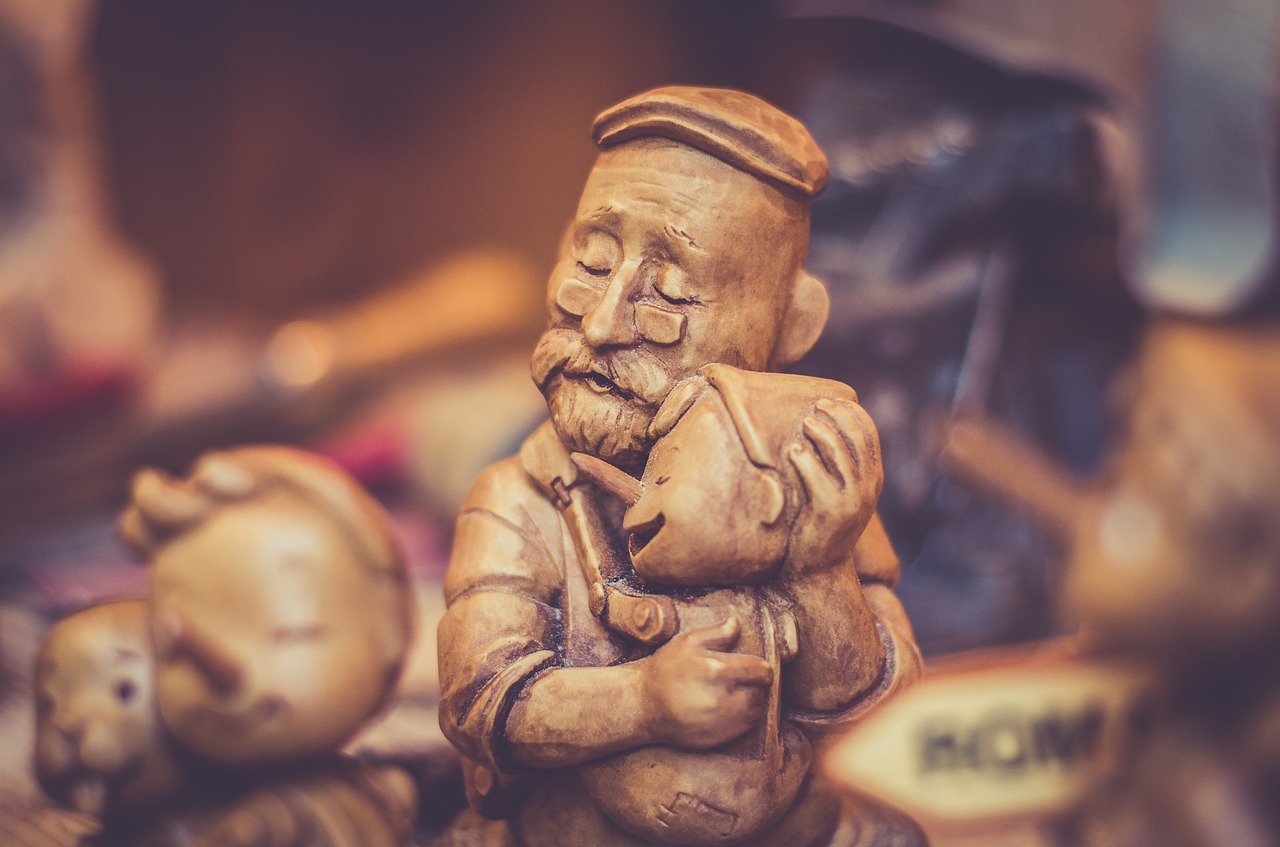 “A child unable to please his father soon becomes a child unwilling to try.” (Colossians and Philemon for Pastors, p.288)

A Single Cross on a Single Day

“… through Him to reconcile all things to Himself, having made peace through the blood of His cross” (Colossians 1:20).

Paul has in view reconciliation not merely on a personal, but a cosmic level (τὰ πάντα, “all things”). The same expression was used three times in verses 16 and 17 to depict, as it does here, “the whole of creation” (BAGD, 633). The totality of created reality is in view. Something happened upon that cross on that Friday that was reality-altering for everything, everyone, everywhere, for all time.

There the Father moved to reconcile “to Himself” (εἰς αὐτόν) an entire creation that had been hurled into opposition against him. “The creation was subjected to futility, not willingly, but … in hope” (Romans 8:20). The realization of that hope was purchased on the cross. For it was there that God the Father “made peace” (εἰρηνοποιήσας) by bringing wrath—not upon our rebellious race and the creation we’ve taken with us into chaos, but by bringing His wrath upon His own Son whom He appointed to stand in our place. The peace-making tells us how the reconciliation was effected. Through our autonomy we made war on God, through His obedience Jesus made peace for us with God.

The means or instrument (διὰ) employed by the Father (at His good pleasure, v.19) to make that peace was “the blood of His cross” (τοῦ αἵματος τοῦ σταυροῦ αὐτου). The blood of Christ effected propitiation (Romans 3:25), justification (Romans 5:9), redemption, the forgiveness of our trespasses (Ephesians 1:7), and, as here, reconciliation (Ephesians 2:13). It is the ground of all the blessings of the new covenant the Father extends to us in Christ (1 Corinthians 11:25).

When Paul speaks of Christ’s blood he is using a figure of speech known as metalepsis. Thus, in the first place, “blood” stands for blood-shedding (i.e., the death of Christ). Then, secondly, Christ’s death stands for the full and complete satisfaction which is made by it and for all the merits of the atonement which is brought about by it. Thus, says Bullinger, to speak of the blood of Christ “means not merely the actual blood corpuscles, neither does it mean His death as an act, but the merits of the atonement effected by it and associated with it” (610). The blood is called “of His cross” (τοῦ σταυροῦ αὐτου) because, of course, it was upon the cross where Jesus gave up His life in death to effect the singular event that would change all things forever.

Everything, everywhere, for everyone, for all time – “… this He did once for all when He offered up Himself” on that single cross on that single day so long ago (Hebrews 7:27).

“Set your mind on things above, not on the things that are on earth.” (Colossians 3:2)

“Paul sets heavenly realities (“the things above”) in contrast to earthly realities (“the things that are on the earth”). In doing so he tells us that reality upon earth is defined by the reality of heaven, not the other way around. Spiritual truth defines tangible reality. We are on dangerous ground when we weigh spiritual matters by what appears to be the fact based on limited, earthly evidence. He who sees only the earthly sees only partial reality; he misses the most vital pieces of evidence for interpreting reality in its fullness.” (Colossians and Philemon for Pastors, p.233)

“Here there is not Greek and Jew, circumcised and uncircumcised, barbarian, Scythian, slave, free; but Christ is all, and in all.”  (Colossians 3:11)

“The false teacher(s) was preaching a ‘gospel’ that divides – some are ‘in’ and others are ‘out.’ Some are ‘in the know’ and others are not.  The gospel of Jesus Christ unites. It overcomes social, racial, religious and cultural distinctions to make all believers stand on the level ground of grace before God ‘in Christ.’ The grace of God coming down to man is given without regard to such distinctions. That grace which operates on a vertical axis from God to man then goes horizontal between the recipients of such grace and those same distinctions fade away in the fellowship of those who make up the ‘new self.’

In strong contrast to such distinctions (ἀλλὰ, “but”) Paul makes the amazing assertion that ‘Christ is all, and in all’ (πάντα καὶ ἐν πᾶσιν Χριστός). He closes with a phrase which is void of a verb, but is all the more powerful for its succinctness. Most English translations appropriately add the verb ‘is’ for our understanding. The proper noun (Χριστός, ‘Christ’) is placed at the end of the sentence for emphasis. Christ is said to be ‘all and in all’ (πάντα καὶ ἐν πᾶσιν).  Just what is meant by saying Christ is ‘all’ (πάντα)? The neuter plural form serves to encompass all things. Robertson says that  πάντα is used as a predicate for Χριστός and thus stands ‘for the totality of things.’[1] Christ created all things (1:16a). Christ sustains all things (1:17b). Christ is supreme over all things (1:17a). Christ is ‘all’ (πάντα). This is not a pantheistic statement, but a way of saying that the sum and substance of everything is Christ. He is the singular point of their origin. He is the one necessity for their continuance. All things exist for Him (1:16b). It is then both logical and appropriate to speak of Christ as ‘all.’ In the application of God’s grace, then, Christ engulfs all racial, religious, cultural, and cultural differences with His indiscriminate grace. ‘Christ is all’ anyone needs to become a fully welcomed and functioning participant in the ‘new self.’ Nothing added. Nothing needed. ‘Christ is all.’

Paul speaks here of this as an established fact. Yet he speaks elsewhere of it as a fact (in the universal, all-inclusive sense) yet to be established. ‘When all things are subjected to Him, then the Son Himself also will be subjected to the One who subjected all things to Him, so that God may be all in all [πάντα ἐν πᾶσιν]’ (1 Cor. 15:28). Indeed, even here in Colossians he does so: ‘He is also head of the body, the church; and He is the beginning, the firstborn from the dead, so that He Himself will come to have first place in everything [ἐν πᾶσιν]’ (1:18). What Christ is now He is by divine and redemptive right. Yet this is not currently seen and acknowledged by all. At His return, however, all will see what has always been true of Him – ‘Christ is all in all’!

As sweeping as is the first part of this statement, this is not all that Paul asserts. He adds (καὶ, ‘and’) that Christ is ‘in all’ (ἐν πᾶσιν). The adjective (πᾶσιν, ‘all’) by form may be either neuter (‘in all things’) or masculine (‘in all [redeemed] people’) plural. The first would be a pantheistic statement, something Paul would not make. Surely then it is the latter and Paul is emphasizing that Christ now indwells His people through His Spirit (John 14:16-18). He has made His people His temple, both individually (1 Cor. 6:19) and corporately (1 Cor. 3:16). Elsewhere Paul speaks of God as the ‘Father of all who is over all and through all and in all [ἐν πᾶσιν]’ (Eph. 4:6). Now the fullness of God (Christ) has come to fill us full of Himself (Col. 2:9-10) and to be in us and to us and for us all that we should be. Indeed, our calling is to be ‘His body, the fullness of Him who fills all in all [πάντα ἐν πᾶσιν]’ (Eph. 1:23)! This will not be fulfilled by straining effort to achieve such a standing. It is achieved by Christ as He indwells His people who in restful faith simply find Him to be their all in all. This cannot be restricted by any distinction found among mankind—be it cultural, racial, religious or social. ‘Christ is all and in all’!” (Colossians and Philemon for Pastors, pp.256-257)

New Book Give Away

I am giving away three copies of my newest commentary Colossians and Philemon for Pastors. 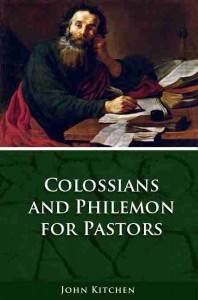 Here are the ground rules:

If you would like to be considered just email me at: jkitchen (at) stowalliance (dot) org.