“‘Do not preach’ – thus they preach – ‘one should not preach of such things; disgrace will not overtake us.’” (Micah 2:6)

The preacher was not appreciated because of his negative message. He observes, “If a man should go about and utter wind and lies, saying, ‘I will preach to you of wine and strong drink,’ he would be the preacher for this people!” (v.11).

There must be no word of censure, only words of indulgence. No words of prohibition, only permission.

Is this not the spirit of our age? These days the worst offense anyone could commit would be to ‘preach.’ The very word is offensive and is counted the unpardonable secular sin. Merriam-Webster’s on-line thesaurus lists the first five synonyms of preaching in profoundly negative terms: moralizing, pontificating, interference, kibitzing, meddling.

Preaching (particularly preaching that censures) is, then, preached against. And the irony is lost on those who do so.

What Child is this? 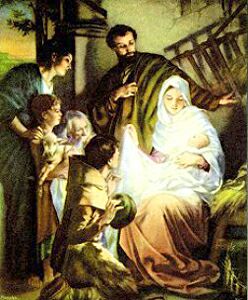 On this Christams day let me invite you to connect the dots between two Scriptures you might be unlikely to otherwise look at in the same sitting.

The first is an prophecy from the Hebrew (Old Testament) Scriptures:  “But as for you, Bethlehem Ephrathah, Too little to be among the clans of Judah, From you One will go forth for Me to be ruler in Israel. His goings forth are from long ago, From the days of eternity” (Micah 5:2).  The second is Apostolic instruction from the New Testament: “He [Jesus] is before all things, and in Him all things hold together” (Colossians 1:17).

Hundreds of years before Mary and Joseph waddled into the town God had already designated the place of Messiah’s birth.  At the request of Herod the Bible scholars were able to put their finger on the spot where Christ would be born (Matt. 2:4-6).

While the place might have been predicable, just exactly what they would find there was not so well understood.  Micah said they would find One whose “goings forth are from long ago, From the days of eternity.”  In other words the newborn they would find there would be the timeless, eternal God in human flesh.  The One the visitors were to celebrate was in actual fact the One who knows no beginning or end, He is “the Alpha and the Omega, the first and the last, the beginning and the end” (Rev. 22:13).

Though using more theological wording, didn’t the Apostle Paul said the same thing: “He is before all things, and in Him all things Hold together” (Col. 1:17).  The one hugged by Bethlehem’s barn was the Creator who had made not only that place, but all the universe.  Indeed, more than His timelessness is celebrated by Paul: “in Him all things hold together.”  He is, if you will, the “glue” that holds this universe together.  Matter itself cannot cohere without His sustaining ministry.  Were Jesus to fail for a nanosecond to sustain His constant keeping power over this creation, reality as we know it would disintegrate: the laws of nature would no longer be consistent and dependable, logic would cease, up could be down and down could be up, matter itself would explode as atomic particles spin out of their orbits!
Have you ever wondered: How did Jesus sustain all things while He was just a baby?  Mystery, isn’t it!  While you chew on that, consider this as well: How would the truth of Jesus’ sustaining power of the universe help someone you know today?

What Child is this, who, laid to rest,
On Mary’s lap is sleeping?
Whom angels greet with anthems sweet,
While shepherds watch are keeping?
This, this is Christ the King,
Whom shepherds guard and angels sing:
Haste, haste to bring Him laud,
The Babe, the Son of Mary!

Why not find some quiet place and to give yourself some space for an extended time of worship before the Son of God?  Praise Him for His sustaining grace in our world and in your life.  Then present to Jesus the confusing and chaotic circumstances you face and ask Him to make sense of them.  Then be at rest in your soul.