We have been considering how to live our lives on purpose, with intention, on mission with God.

Acts 1:8 is the map Jesus has given to us for this purpose: “But you will receive power when the Holy Spirit has come upon you, and you will be my witnesses in Jerusalem and in all Judea and Samaria, and to the end of the earth.”

Last time we considered the first prong of this four-fold strategy—reaching our Jerusalem. Your Jerusalem is made up of the people who are geographically near to you and culturally like you.

Let’s now consider your Judea. Those in your Judea are still culturally like you, but they are different than those in your Jerusalem because they are geographically in proximity to you. 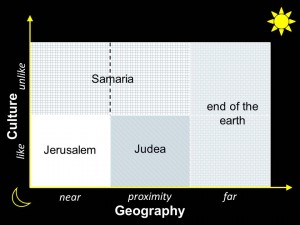 What does that mean?

The people in your Judea are “like” you in things such as income, neighborhoods, tastes, schools, work, ethnicity, language, hobbies, sports/reading/music/entertainment interests, etc. But they don’t’ live in your immediate circle of relationships or community, yet neither do they live at the ends of the earth. These people live within proximity of you; they are neither next to you nor far distant from you. They are people generally like you in terms of culture, but who are just beyond the circle of your immediate relationships.

You likely won’t know them by name, because you don’t know them personally … yet. You’ll probably have to identify them by other markers. For example, if you love High School football, you might say, “Others that gather at the same Friday night game” or “Other parents/boosters of our team that I don’t yet know.” Or it might be “Other engineers (or accountants, teachers, plumbers, etc.).” It might be, “Other book lovers (if you love to read).” Or, if your hobby is crafts, it might be “Other craft lovers.”

You get the idea.

Take a few minutes and ask God to help you identify people who are generally like you, but who you don’t yet know. Consciously (or better, in writing) identify several of those who make up your Judea.

Now, what is one thing you can do to take a step toward those people? Just to begin to build relationship with them, to position yourself in their lives, to get to know them and to let them begin to know you?

When will you take one of those steps?

As you take that step, remember, when you are walking with Jesus into their lives. You might not share the gospel with them this week (or maybe you will!), but you are moving toward the place where they will trust you enough to allow you to do so. As has been said, you are building relational bridges capable of bearing the weight of truth.