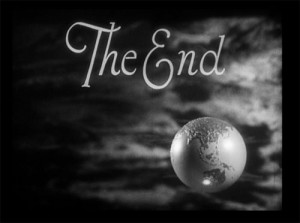 “… then comes the end, when He hands over the kingdom to the God and Father, when He has abolished all rule and all authority and power. For He must reign until He has put all His enemies under His feet. The last enemy that will be abolished is death. For HE HAS PUT ALL THINGS IN SUBJECTION UNDER HIS FEET. But when He says, “All things are put in subjection,” it is evident that He is excepted who put all things in subjection to Him. When all things are subjected to Him, then the Son Himself also will be subjected to the One who subjected all things to Him, so that God may be all in all.” (1 Corinthians 15:24-28)

“History is linear, not cyclical. We are not caught in an unending experience of living through the past’s reruns. We are headed somewhere. There is coming a time, in ‘the end’, when the authority invested in Christ by the Father will have been brought to its end goal. The kingdom of God will win. Justice will be served. All opposition will be put down. All ‘dominion, authority and power’ will have been destroyed. Christ will be Victor! Finally, and forever all that displeases and dishonors God will be under His feet! Having won the battle He was sent for, Jesus will hand the kingdom over to the Father once again. He then ‘will be made subject to him who put everything under him.’ Think of it! Mystery of mysteries! How can the co-eternal, co-equal Son eternally subject Himself to the Father with Whom He shares all the prerogatives and essence of Deity? ‘The passage is a summary of mysteries which our present knowledge does not enable us to explain, and which our present faculties, perhaps, do not enable us to understand.’ Though our minds cannot fully comprehend it, this implies no inferiority of the Son to the Father either in His person, nature, or dignity. It simply means that even the Son, without surrendering His deity or dignity, is willing to subject Himself eternally to the Father so that the authority of the triune God might be forever a wonder the new creation can’t take its eyes off of.” (Embracing Authority, pp.206-207)