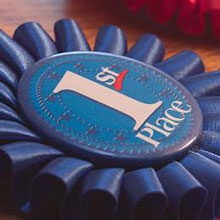 This time of year we reflect intentionally upon the supremely important message of Jesus’ death and resurrection. Take note of two words Paul used to describe that message: “first importance.” The death and resurrection of Jesus Christ has priority over all things. It is significant beyond all else in time, space, history, culture, experience, imagination or thought.

Ever seen a person who is physically unable to eat? Watched the effect upon her body? Observed the slow process of inching toward death? Quickly you realize again what is of “first importance.”

But that sense of clarity doesn’t always fill the 24 hours we are given each day. We are consumed with filling the car up with gas, getting to work on time, putting the kids to bed, paying bills, texting and catching up with Facebook.

I was thinking the other day about when Vice President George H.W. Bush represented the United States at the funeral of former Soviet leader Leonid Brezhnev. While there Bush was moved by a silent protest carried out by Brezhnev’s widow. She stood without moving at the coffin of her husband, remaining there until seconds before it was closed. Then, just as the soldiers touched the lid to seal in their leader’s body, Brezhnev’s wife did something that took tremendous courage. She made a gesture that must rank as a great act of quiet defiance, given its context and time. She reached down and she made the sign of the cross on her husband’s chest. There in the center of the Soviet Union’s secular, atheistic power, the wife of the man who had headed it all hoped that he had been wrong. She hoped that there was another life and that life was available through Jesus Christ who died on the cross and rose again.

Eventually we all face the matters of “first importance.” We can’t escape them. Brilliant and bold or quiet and slow—it doesn’t matter who you are, where you live or how you spend the moments that make up your life—you’re destined to end up back at the matters of “first importance.” We all must face the fact of Jesus’ death and resurrection. He is God who came in human flesh, lived a perfect life, died in your place, taking your punishment, bearing your guilt, enduring God’s holy anger toward you, so that you could be accepted by God in love. God raised Jesus to life forever more. Jesus is alive. He wants you. He is pursuing you.

And He loves and seeks and desires the people He has put within the circle of your relationships. Why not take these new few weeks to invite them to consider these matters of “first importance” by way of conversation or perhaps by joining you for a Good Friday or Resurrection Sunday service?