(see Part 1 of this blog post for fuller context) 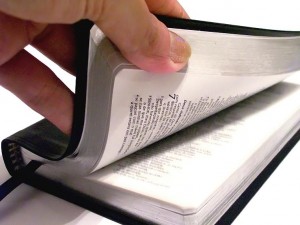 Someone objects: “Show me an example of expository preaching in the NT!”

The question is sometimes asked as if the questioner has just played the trump card which ends all discussion.

I read somewhere recently that John Stott said that the NT nowhere gives us a description of a Christian worship service which includes preaching except Acts 20:7. I’m not sure about the accuracy of that, but it is instructive that Stott goes on to point out that this is no reason to believe preaching was an exception to the rule.

The question of NT examples of Biblical (or more specifically “expository”) preaching in a Christian worship service is a good question and hopefully an honest one. But it isn’t the only or even the best question.

What do we have recorded for us in Scripture? In the book of Acts we find narratives that largely describe evangelistic messages made in public forums … not examples of the gathered church in worship. While we do not have many such examples, we do have instruction about what those settings are to include.

Let’s take for example, the way Paul ends the book of Romans. In what seems to be his most thorough exposition of the grace of God to us in Jesus Christ Paul ends by saying this: “Now to him who is able to strengthen you …” (16:25a). I think “strengthen” is better rendered “establish” (cf. NIV, NASB, NKJV, etc.). The idea there is to make steady, make firm, make strong, found, establish. Sounds like discipleship to me. How did he suggest to the Roman believers this was able to happen? “… according to my gospel and the preaching of Jesus Christ, according to the revelation of the mystery that was kept secret for long ages but has now been disclosed and through the prophetic writings has been made known to all nations, according to the command of the eternal God, to bring about the obedience of faith” (vv.25-27). How are disciples grounded and founded and established in their faith?

1) through the gospel of Jesus Christ (“according to my gospel”) … Yes, of course, we say!; but there is more … disciples are established …

3) through the gospel of Jesus Christ preached from the Bible (“according to the revelation of the mystery that was kept secret for long ages but has now been disclosed and through the prophetic writings has been made known to all nations”).

It would be wrong, in my opinion, to conclude this is the only thing Paul has to say about establishing disciples in their faith. Surely there are other components, like one-on-one or small group kinds of things (to use our jargon). But it would be equally wrong to conclude that anything else he said about establishing disciples of Jesus (i.e., “to bring about the obedience of faith”) would exclude the need to preach the gospel of Jesus and its implications to the already-saved from the Bible as a part of their steady diet of discipleship.