“On account of these the wrath of God is coming.  In these you too once walked, when you were living in them.” (Colossians 3:6-7)

What would sufficiently motivate you to put something to death?  To put something in you to death?  Paul has just ordered us to “Put to death” the sins of verse 5 (see Dealing Radically With Sin Parts 1, 2, and 3). The natural question is: Why? 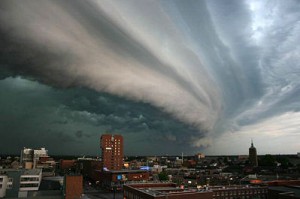 In verses 6 and 7 the Apostle gives an adequate reason for this jarring imperative of verse 5.

“On account of” translates a Greek word that points to “the reason or cause on account of which anything is or is done, or ought to be done” (Thayer, 134).  By “these” Paul means the five vices he just listed in the previous verse.  The powerful motivating force is “the wrath of God is coming.”

The concept of God’s wrath is more broadly spoken of in the New Testament.  Paul lays special emphasis on it in his letter to the Romans.  He is “The God who inflicts wrath” (3:5).  And God’s wrath presently abides on the unbelieving (John 3:36); indeed they are storing up God’s wrath against them by their unbelief (Rom. 2:5).  And yet God’s wrath is in some way currently falling from heaven against unrighteousness (Rom. 1:18).  At least one expression of this would be through the secondary means of the government’s power to punish evildoers (Rom. 13:4).  Yet God is patient in the expression of His wrath (Rom. 9:22).

Here we are told that the outpouring of God’s wrath “is coming.” The verb is present tense and pictures the wrath of God as already in motion and its ultimate arrival as inevitable. The middle voice pictures God acting upon Himself to express His wrath, moving Himself in the current expression of His wrath, and moving toward its fullest and unrestrained outpouring.  God has judged sin in Christ for all who through repentance and faith hide themselves in Him.  But for those who do not, God is currently pouring out His opposition to sin and will ultimately, climatically, devastatingly do so in fullest measure.

This, says Paul, is more than reason enough to take the radical step of putting to death the vices and impulses within us as listed in the previous verse.

Note that some versions, unlike the ESV, include a clause which is present in some manuscripts of the Greek New Testament.  Its inclusion is disputed, but we will note here that it adds that God’s wrath is coming “upon the sons of disobedience” (NASB).  It is possible that a scribe may have added them here because the same words appear to be genuine in the parallel verse in Ephesians 5:6. The expression itself (“the sons of disobedience”) is a “Semitic idiom that means ‘people characterized by disobedience’” (NET Bible).  That the wrath of God is described as coming “upon” them indicates that the judgment falls from above, from a higher plane of authority—that is to say, it is indeed divine.  Those who live out their live on the purely horizontal plane, seldom if ever lifting their eyes to include the higher perspective of divine realities exist for the purely selfish (“greed”) and sensuous (“evil desire,” “passion,” “impurity,” and “sexual immorality,” v.5).  There is no one “above” them – who created them, who owns them, who is ruling them – no one to whom they must answer.  One day they will be utterly shocked to discover divine, inescapable, eternal wrath descending upon them and holding them accountable for a lifetimes of misdirected desires and actions.

The preposition (“In”) pictures the sphere of the Colossian believers’ pre-Christian lives.  It stands in stark contrast to their present life “in” Christ, an emphasis found so frequently in Colossians (e.g. 1:2, 28; 2:3, 6, 7, 9, 10, 11-13, 15) and elsewhere in Paul’s writings.  That Paul is speaking here of the Colossian believers is made clear by his use of the plural form of the personal pronoun (“you”).  The verb (“once walked”) is a common one meaning simply “to walk.”  But it is often used by Paul as he does here (cf. also 1:10; 2:6; 4:5) in a figurative sense describe the unfolding of one’s life one step at a time.  This way of life was true of them “once,” though, apparently, no longer because of the liberty from sin they had found through repentance and faith in Jesus Christ.  Paul is thinking back to the time “when you were living in them.”  By “them” he means the five vices listed in verse 5. The imperfect tense views their former life as an ongoing, repeated set of experiences that made up a certain quality of life.  The second person plural reminds the Colossian believers that this was the case in each and every one of their lives.  Again, as the opening of the verse, Paul pictures the sphere of their pre-Christian lives (“in them”).  In the sphere of these sins and impulses the Colossians—and we—had both “walked” and “lived” before we met Christ.

Before we met Christ we stood at ground zero for the detonation of God’s wrath.  Is there any better motivation to deal in death with all that once held us immobile before the gathering clouds of God’s holy, divine, infinite wrath?

That Which Destroys Relationships