“Take my yoke upon you and learn from me, for I am gentle and humble in heart, and you will find rest for your souls.” (Matthew 11:29) 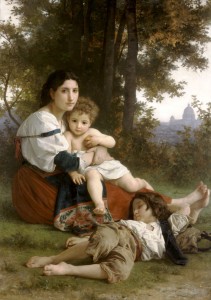 Jesus’ gentleness and humbleness are not simply reasons to take His yoke and learn from Him, they are the very lesson He teaches us when we are yoked up with Him.  The pathway to rest is the journey of gentleness and humility.  We are too often un-restful trying to figure out what God wants from us.  Too much of my life has been lived not restfully, but fretfully.  It leads to sheer exhaustion of soul.

But here is Jesus telling us that the path to rest is down the lane of gentleness and humility.  The proof of the journey is rest in our souls.

But just what are gentleness and humility?  Gentleness first.  It is sometimes translated “meekness.”  It means “power under control.”  The old illustration is of a powerful horse which is restrained by a tiny bit in its mouth.  Its power is under control.  Training produced this.

But this is counter-intuitive, isn’t it?  Too often we try to control – exerting great amounts of mental, emotional, physical energy to control the direction of lives, circumstances, family, job, neighborhood, school, etc.  Instead of aiming to control the power we have been given, we aim to control people, situations, circumstances, and problems that seem to be in our way.  Little wonder we are exhausted!  We’ve been misapplying the power we’ve been entrusted with!

Perhaps this is the point: to restrain your power is itself an expression of power.  In other words: meekness is the first demonstration of true power.  Power proves itself by controlling itself.

Yet too often we think of it precisely in the opposite direction.  Power demonstrates itself in producing great and awesome results.  No!  The first proof of true power is that it restrains itself.

Maybe we’ve spent too much time praying for God to give us more power, when God has already given us His power – in the indwelling Holy Spirit.  The trouble is I haven’t always been using this power as He prescribed.  The anointing and power of the Holy Spirit is first proven in self-control – in thoughts, words, actions, attitudes.  There is no power for ministry outwardly when meekness is not found in the inner world of the soul.  Why would God entrust us with more power for outward ministry when we don’t apply inwardly the power He has given us?

Then there is humility.  There is far too much “me” in ministry.

If we want this “rest” we each must yoke-up with Christ.  We each must take the place of learner (disciple) and enroll in the first two courses in the program: gentleness and humility.  His power must work in us before He will ever work it through us.  We must discover how this orientation to life enables us to let go of the things that so exhaust us … efforts to control and produce.

I suppose this is another way of saying that Jesus calls us to “be” before He calls us to “do.”  Reverse it and pay the price – fruitlessness, frustration and exhaustion.  Walk it and find rest for your soul.