“… magi from the east arrived in Jerusalem, saying, ‘Where is He who has been born King of the Jews? For we saw His star in the east and have come to worship Him.'” (Matthew 2:1b-2) 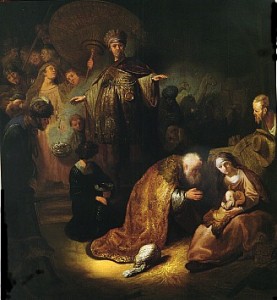 One of my favorite Christmas carols ends with the exhortation: “Come and worship, Come and worship, Worship Christ, the newborn King!”  Notice, however, who it was that came to worship the newborn King.  It wasn’t the religious scholars of Israel (vv.4-6), it was pagan, Gentile astronomers.  Their worship of the Christ becomes a good model for ours.

The worship of the magi was passionate—pursuing Christ from as far as 1000 miles away (v.2).  They had only seen His star in the sky, but they were hungry for a peek at this new King.  What are you passionately pursuing this Christmas?  The magi were in passionate pursuit of the most compelling Person ever to live.  Are you?

The worship of the magi was also joyful—“when they say the star, they rejoiced exceedingly with great joy” (v.10).  Because they were seeking Jesus with such intense desire, anything that would point them toward Him was an object of joy to them.  The phrase literally means “they rejoiced with a great joy exceedingly!”  These guys were beside themselves.  Can I ask you, what brings that kind of joy to your life?  Honestly, is it Christ?

The worship of the magi was also wholehearted—“they . . . saw the Child . . . and they fell down and worshiped Him” (v.11).  Literally its, “Falling down they worshiped.”  His majesty was such that they were thrown upon their faces before Him.  These men were religious leaders back home.  They carried political clout in their homeland.  They knew protocol in the presence of an earthly king, but what to do in the presence of the King of kings?  No posture was appropriate before this King but to be on one’s face.

I also notice that the worship of the magi was sacrificial—“and opening their treasuries they presented to Him gifts of gold and frankincense and myrrh” (v.11b).  These were no doubt men of means, but these gifts cost them something.  Like David, they refused to offer to God worship that had cost them nothing (1 Chron. 21:24).

A few questions for reflection:

Offer Him gold and frankincense and myrrh;

We to the Christ-child Bring our hearts’ devotion.

O come, let us adore Him, Christ the Lord.

Make some time to sing and pray this week, making sure to worship Christ for who He is.