“Let the peace of Christ rule in your hearts, to which indeed you were called in one body; and be thankful.”  (Colossians 3:15) 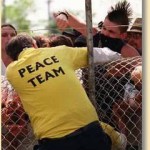 To his previous imperatives the Apostle now adds another command: “Let the peace of Christ rule.” The present imperative demands that action be taken repeatedly, habitually, and as a pattern of life.  The verb meant to be a judge or umpire in the public athletic games.  Thus it came more generally to mean to preside, to direct, to control.[1] That which we are to given such broad powers is “the peace of Christ.”  Just how is the genitive to be construed?  It could be an objective genitive: the peace which Christ possesses.  But surely it is a subjective genitive: the peace which Christ gives, the peace which comes from Christ,[2] or “the peace brought by Christ.”[3] Robertson suggests a combination of the two, saying it is the peace that Christ “has and gives.”[4] The peace which Christ brings and gives to us is first redemptive and vertical—establishing peace with God (Col. 1:20).  From that restored relationship Christ then brings to each of us peace within our hearts (the peace of God) and peace within our circle of relationships.

The arena of this peace’s reign is “in your hearts.” The heart is the core of one’s being—the place where intellect, volition, and emotion arise from.  In and from this locus peace is to be permitted sovereignty.  The preposition (“in”) identifies the location of peace’s rule, but it could mean either “in” or “among.”  The former would point to a personal experience; the latter to an interpersonal, communal experience.  Which is intended here?  Though the verb (“Let . . . rule”) is singular this phrase is in the plural.  Each individual believer is responsible to make certain that Christ’s peace reigns in his heart and from his heart in his relationships with others.  This would seem to underscore the more inclusive sense of the phrase “the peace of Christ” – it is something each one must receive, experience, and appropriate, but it is something that is also then experienced collectively as God’s people.

This is not simply a good idea passed on by the good Apostle.  Rather this is that “to which indeed you were called.” The preposition (“to”) is used spatially, meaning it was “into” such “peace” that we were called.  To this “you were called.”  Paul has just referred to the Colossians as “those who have been chosen by God” (v.12).  Now he elaborates on something of what that privileged grace gives and requires.  Here the aorist tense looks upon the event of God’s call extended to each believer.  The passive voice pictures God’s initiative in calling each believer.  God’s call to Himself through Christ is a call to be at peace (with Him) and to live at peace (with ourselves and one another).  This was a call “in one body.” This should be understood in the sense of “the oneness of the body being the sphere and element in which that peace of Christ was to be carried on and realized.”[5] Each one is called individually, but God is calling more than one and all of them together discover that they have been called into one unified body.

Paul now adds (“and”) a second imperative: “be thankful.” The verb (“be,” lit. “become”) may be drawing “attention to the ‘constant striving after this exalted aim as something not yet attained.’”[6] The present imperative demands repeated habitual action.  Gratitude is to become the default setting of our hearts and minds.  Though this particular adjective (“thankful”) is used only here in the New Testament, thanksgiving is major theme in Colossians (1:3, 12; 2:7; 3:16, 17; 4:2).  The present word designates the compulsion of one who is grateful to another for a favor bestowed.[7] Here then it views the believer’s gratitude in response to God’s grace extended into his life.  The emphasis may be not simply upon thanksgiving, but upon thanksgiving expressed.[8]

In the midst of all the hard work of relationships (vv.8-14) in which the believer must constantly be focused on extending grace to the next person, the well of God’s unceasing grace must constantly be bubbling up within him, manifesting itself in gratitude to God for His grace extended to him.  Apart from this ever present, always flowing supply of God’s grace and our resultant gratitude, we will soon run dry of grace to extend to the next person and our relationships will no longer be marked by the touch of God.